Dit is Berlin – our team is just as versatile and individual as this city. In the TIM RAUE restaurant, located at the neuralgic point of tension of recent history – Checkpoint Charlie – we all work together to offer our guests a complete culinary experience. Marie-Anne Wild and Tim Raue and their 35 employees live hospitality to perfection, with dedication, love and passion.

Despite fine-dining precision, our team has shed the dusty attitude of a gourmet restaurant: charming and professional service without a pompous peacock pose is the motto. While chef Phillip Bendel is busy at the plate, the multi-award-winning service under restaurant manager and head sommelier Raphael Reichardt is a hive of activity.

That’s the way it has to be & we wouldn’t have it any other way. Typical Berlin. Typical us. 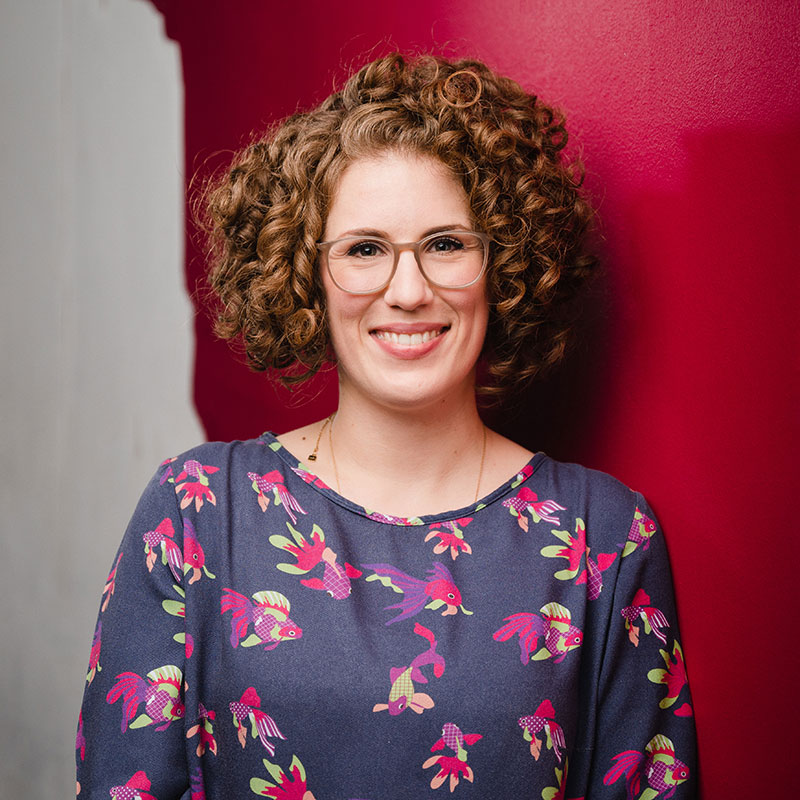 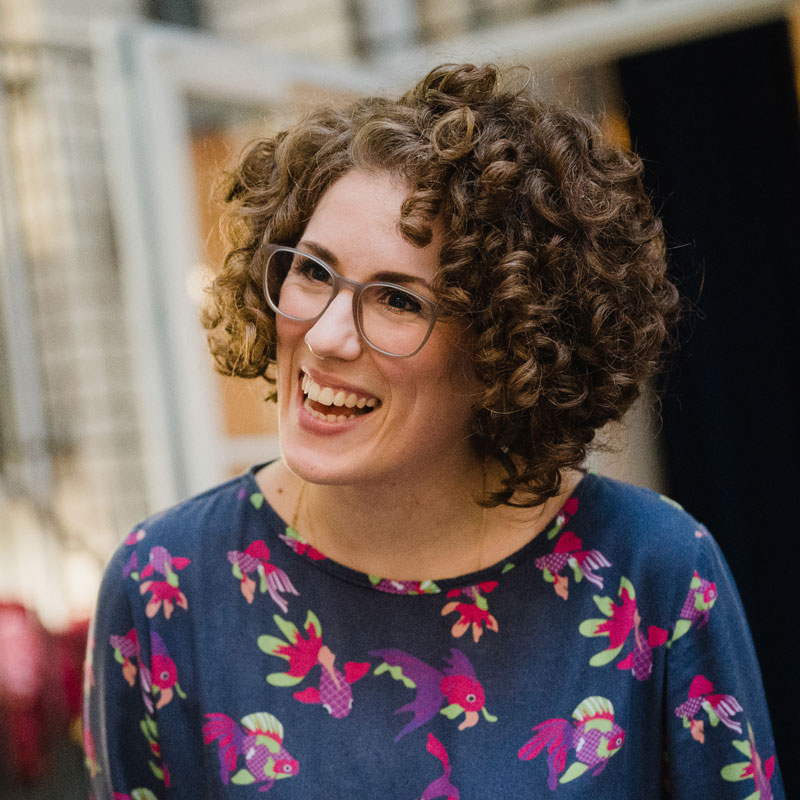 For our Guest Relation & Event Manager Nour, the boards that mean the world are no longer the stage, but the poured asphalt floor in Rudi-Dutschke-Strasse 26, where she light-footedly handles events in the private dining area and for exclusive events in the TIM RAUE restaurant.

As a trained actress and thus a gastronomic career changer, she is proof that ambition, a strong will and the right feeling for guests make a dizzying career possible: Newly joining the RTR team as Commis de Rang in October 2019, the Franco-Lebanese has become an important pillar in Corona times thanks to her organisational skills and empathy.

Moreover, her ability to remain calm in unexpected situations is still proving to be an invaluable talent in day-to-day business! 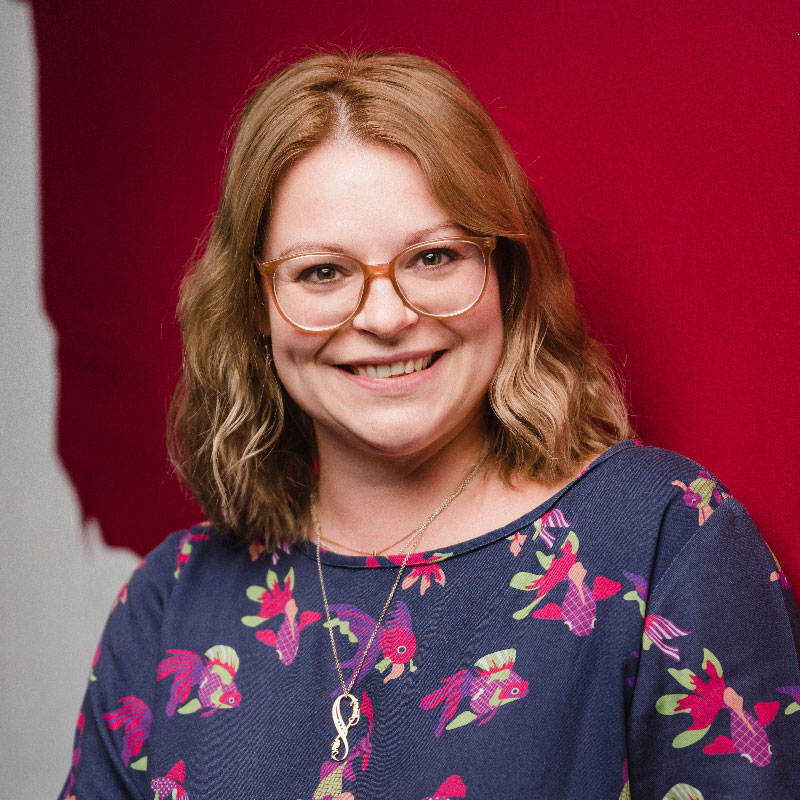 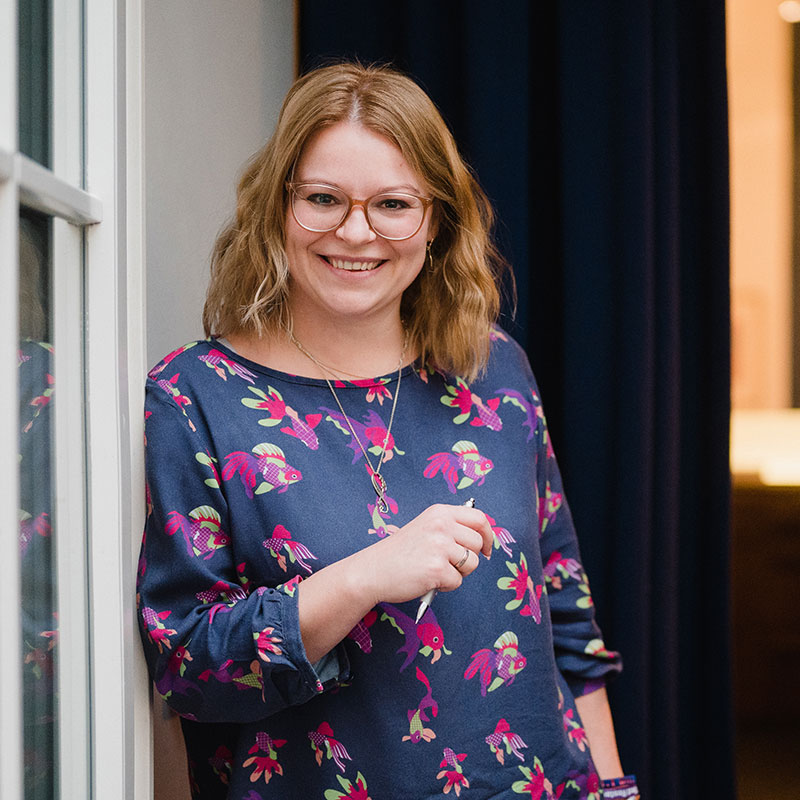 An all-rounder specialising in almost everything: Our Assistant Guest Relation Melanie can be deployed virtually anywhere, because she focuses on the essentials while remaining calm and composed. She already proved this in her first position in the TIM RAUE restaurant as Demi Chef de Rang, and her skills, charm and verve made it all the way to head waitress.

Today, as Assistant Guest Relation, she is responsible for our reception in the restaurant, takes reservations and also looks after our online shop as well as all related requests such as dedications or last minute requests. Melanie always gives her all for our guests and only the best of that!

She also likes to pass on her know-how to new team members and has an open ear for them. And since her husband is our Chef de Cuisine Phillip, she also has a hot line to the kitchen! A power couple & simply a stroke of luck for the TIM RAUE restaurant! 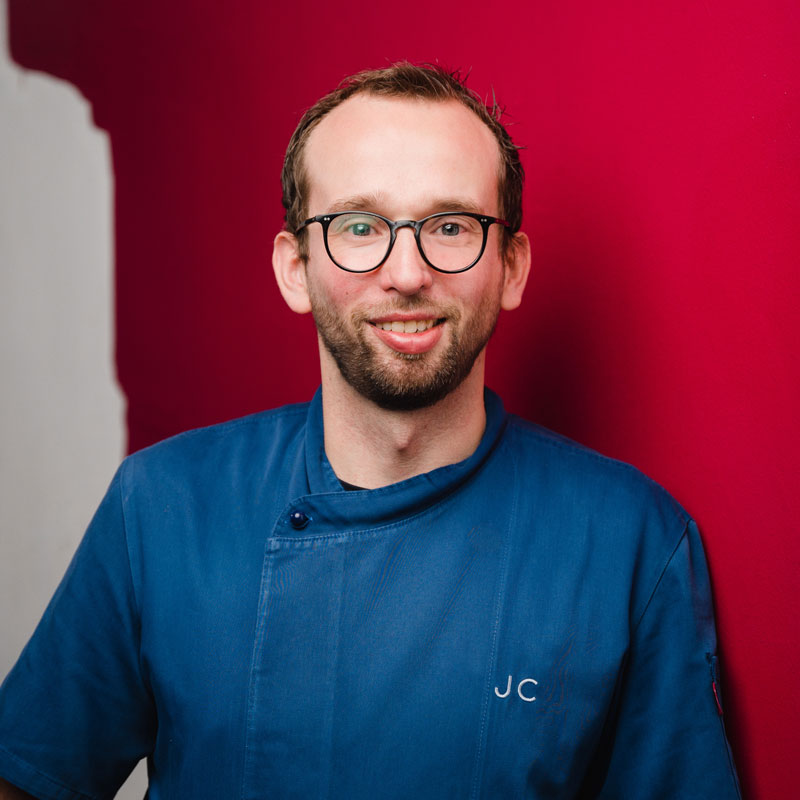 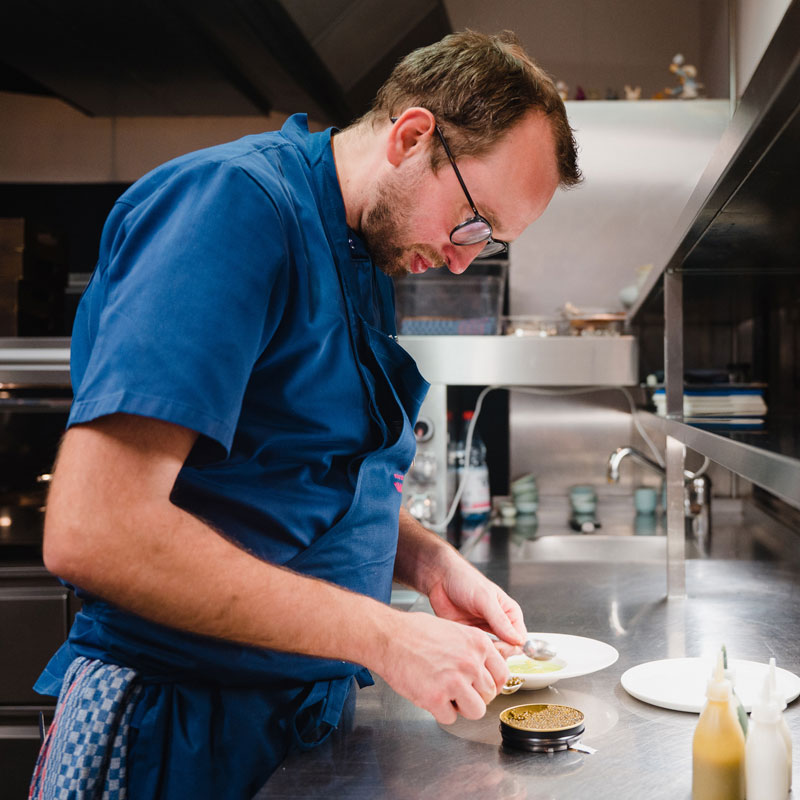 Even if David Bowie sings that everyone can be a hero for a day – we sing the praises of our personal hero every single day: Sous Chef Tobias convinces with the unbeatable combination of precision, patience and chivalrous balance that allows him to keep a cool head even in stressful situations!

His commitment to the TIM RAUE restaurant is indicative of the ambitious career path the Saxon has taken. After training as a chef at Schloss Elmau in Bavaria, Tobias spent his travelling years throughout Germany in great establishments such as the Grand Hotel Sonnenbichl and the Relais&Châteaux Hotel Bülow Palais Dresden. Most recently, he also worked in the position of Sous Chef alongside Nils Henkel at Restaurant Schwarzenstein before joining us in July 2020.

Loyalty, perseverance, empathy and a passion for cooking make Tobias a terrific team player who shines in all his tasks – from producing the daily mise en place for the Gardemange to developing new recipes and dishes. 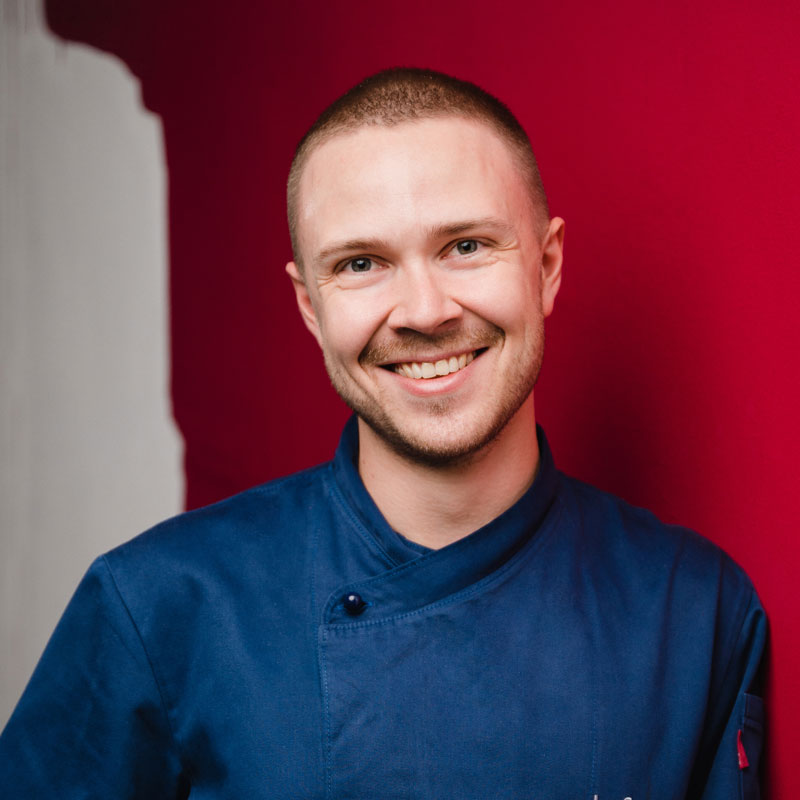 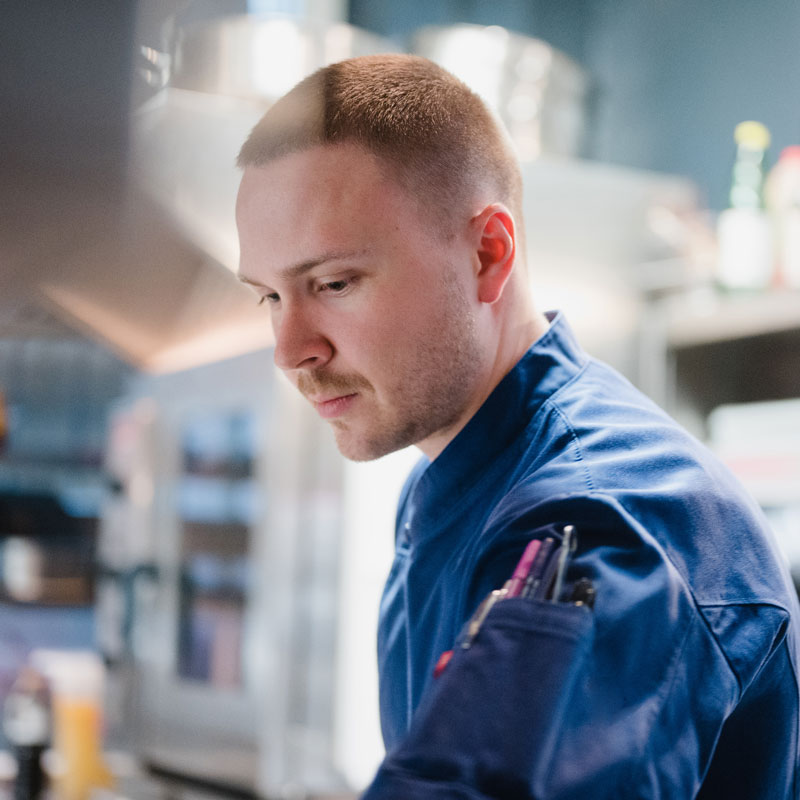 He is the ultimate poster child with star potential, but without the airs and graces: Sous Chef Lion has been proving that he is in the right place with us since day #1 of his training at the TIM RAUE restaurant in February 2015.

Starting as an apprentice, he worked his way up through his reliability and determination to Demi Chef de Partie, to the position Chef de Partie, to Junior Sous Chef and now to Sous Chef of the 2-star restaurant. But Lion himself is also „bestowed“, because as head of the kitchen team at The K by Tim Raue in the Kulm Hotel St. Moritz, he was largely responsible for the brilliant award in the Guide Michelin.

Today, in addition to his duties at the TIM RAUE restaurant, the Hamburg-born chef is on the move on all seven seas as quality manager of the HANAMI by Tim Raue of the TUI Mein Schiff fleet. Once he has solid ground under his feet, Lion, who is our man at the saucier post, also fine-tunes new dishes and prepares caterings, which he does together with Chef Tim Raue.

His passion for the job, his keen interest in new products and techniques as well as his good team leadership characterise Lion, whose future – we are sure – will be bright without question! 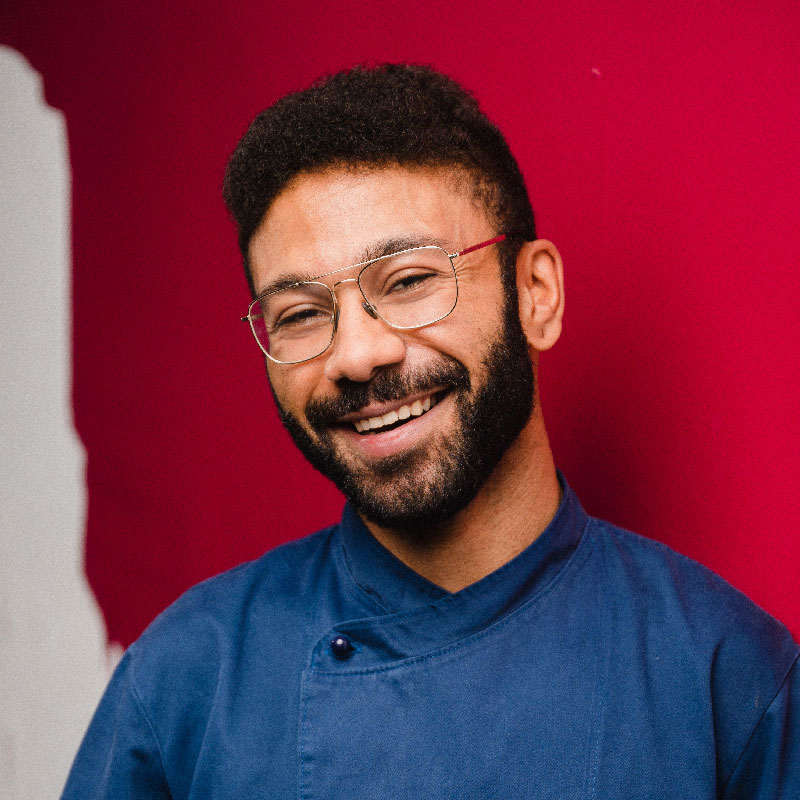 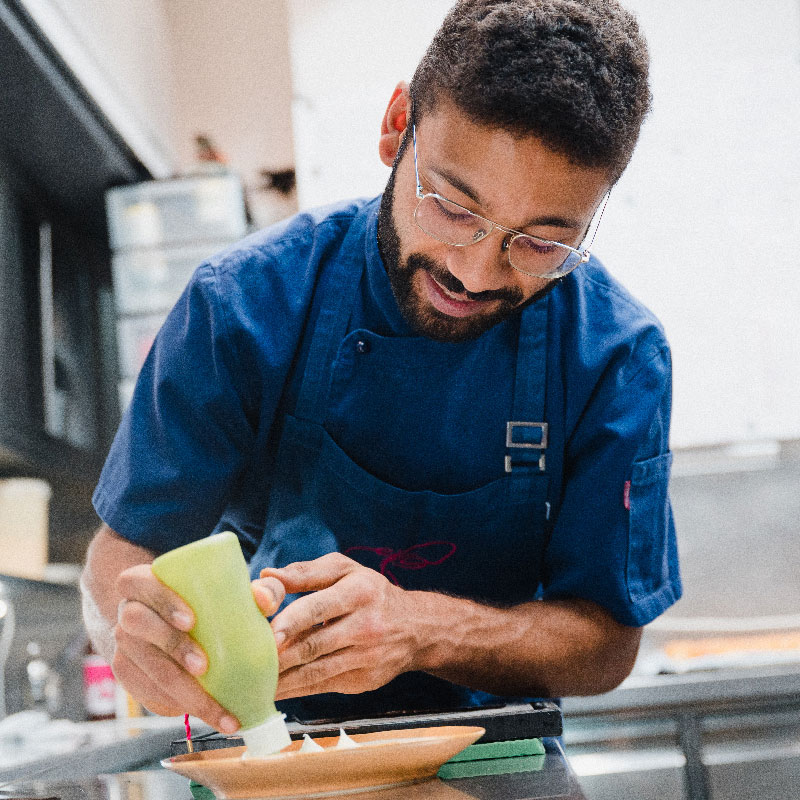 He puts the proverbial icing on the cake for the menus in the TIM RAUE restaurant: Chef Pâtissier Moritz has been creating incredible desserts from entirely new flavour combinations since September 2019. Like his heavenly „Kiwi | Coconut | Shiso“. Or he interprets the familiar into the ravishingly new, like his „Baked Banana | Miso Caramel | Lime“.

The Heidelberg-born chef learned his sweet trade from scratch and perfected it in top establishments in Switzerland. His career has taken him from the Waldhaus Flims Resort and the Kameha Grand Zurich to his most recent position as executive pâtissier at the 18-point restaurant Ricos.

The complexity and sensational aromatics of his dishes are what distinguish Moritz. He has an impressive command of the interplay between pronounced saltiness and flashing acidity. The easy way is not his, he seeks fun and challenge on every spoon and in every aspect of his life. Because as our connoisseur of sweet cuisine rightly says: „Straight roads do not make a good driver.“ 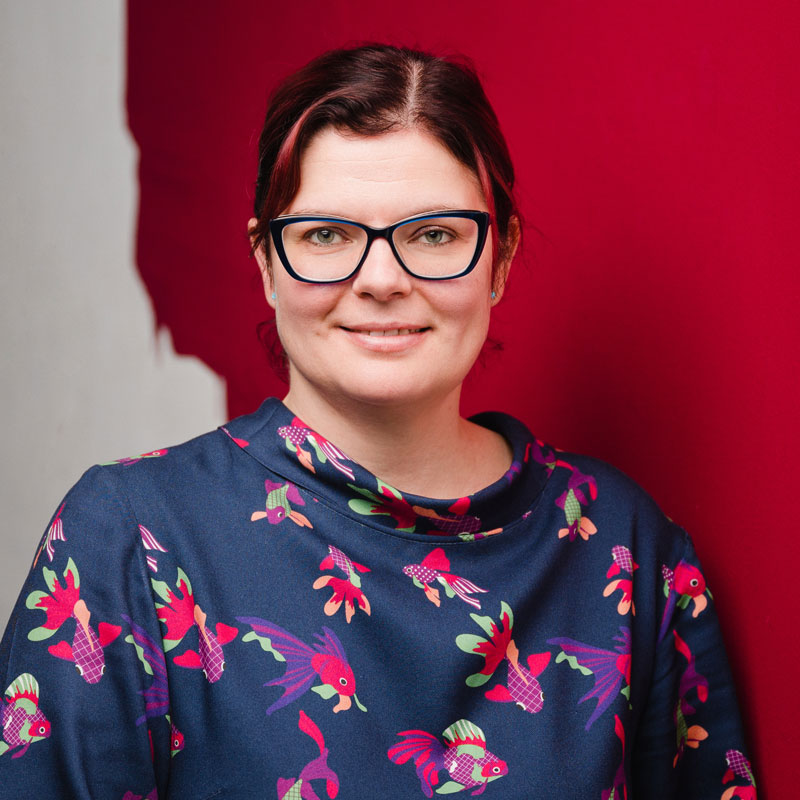 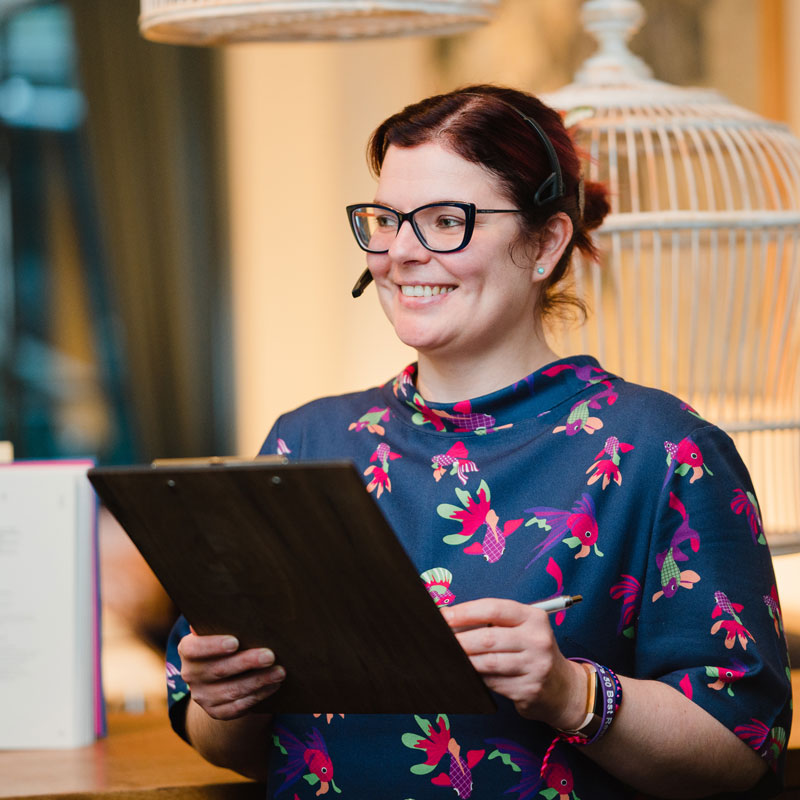 A globetrotter with nerves of steel: Nothing can perturb our Guest Relations Manager Sabrina. She can answer even the more ridiculous requests with a smile – in three languages. Thanks to her, guests‘ wishes come true, because she coordinates the communication between guests, kitchen and service, is also responsible for our shop processing and can – if need be – also do the administration.

Born in Berlin, she is able to deal flexibly with unexpected situations, which is due to her relaxed disposition on the one hand and her wide-ranging experience on the other. Professionally, her stations in France and England were formative – especially the six years as Restaurant Reservation Manager with Daniel Boulud at the Mandarin Oriental Hyde Park. Privately, her year-long trip around the world.

Since September 2016, our globetrotter has been conscientiously ensuring full tables and a good mood at the TIM RAUE restaurant with her positive charisma. True to her motto: „I love my job, I love my wine, I love my food & I love travelling!“ 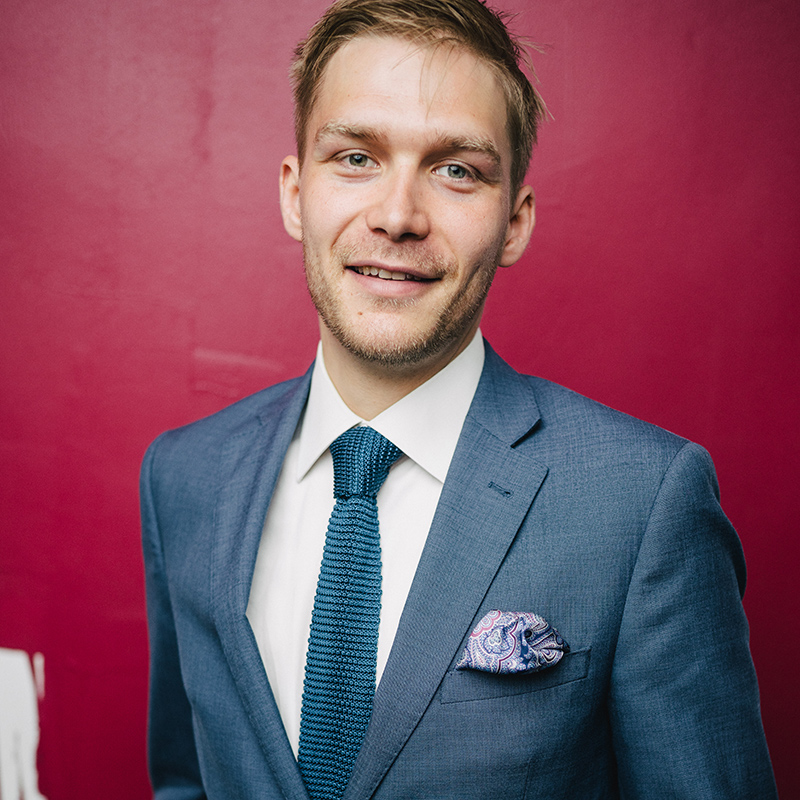 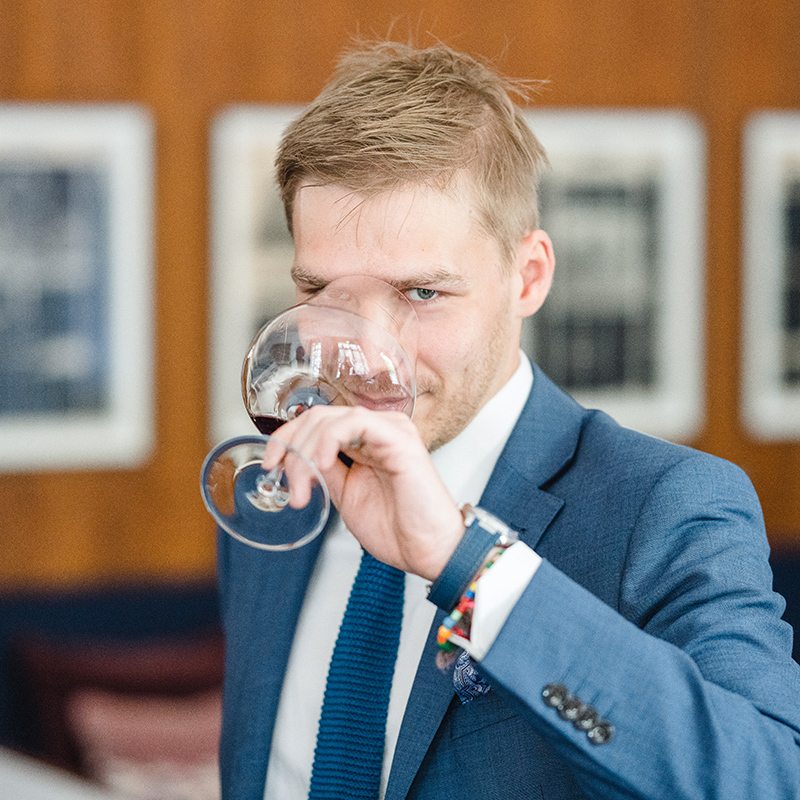 Host, gentleman and guarantor of a lot of fun in the glass: Since June 2021, Raphael has been guiding our guests through the menu as a restaurant manager and head sommelier who is both accomplished and likeable.

Directly after his apprenticeship at the Travel Charme Kurhaus Binz on the island of Rügen, the Heidelberg native joined the TIM RAUE restaurant as a Commis de Rang and learned to love wine there. Following this passion, the father of two children completed his training as a sommelier and also the WSET Level 3 – all the while continuing to climb the career ladder since 2013.

Raphael has come to stay: He is an integral part of the TIM RAUE restaurant and contributes significantly to its success. Be it in front of the curtain in the highly individual support of new and regular guests and in the creation of unforgettable moments – also in the symbiosis of food and wine. Or backstage, looking after the wine cellar and coordinating service and cuisine.

Especially when it comes to wine design, his innovation is groundbreaking: he maintains the line and the concept of the restaurant, but gives it his own, very contemporary touch. Because he is always on the move with his eyes open, looking for new ideas for drinks and wines … 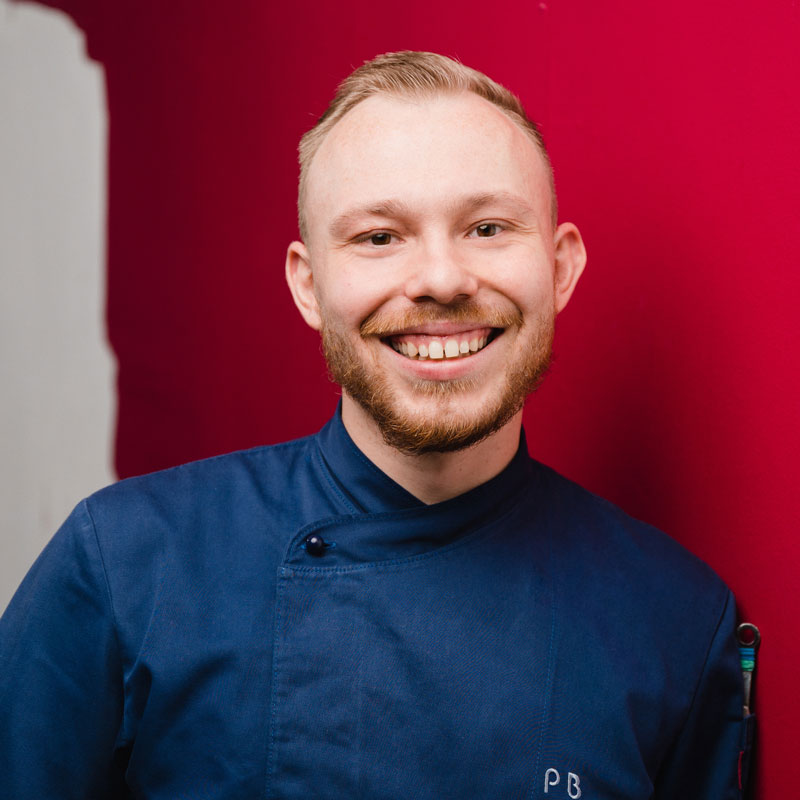 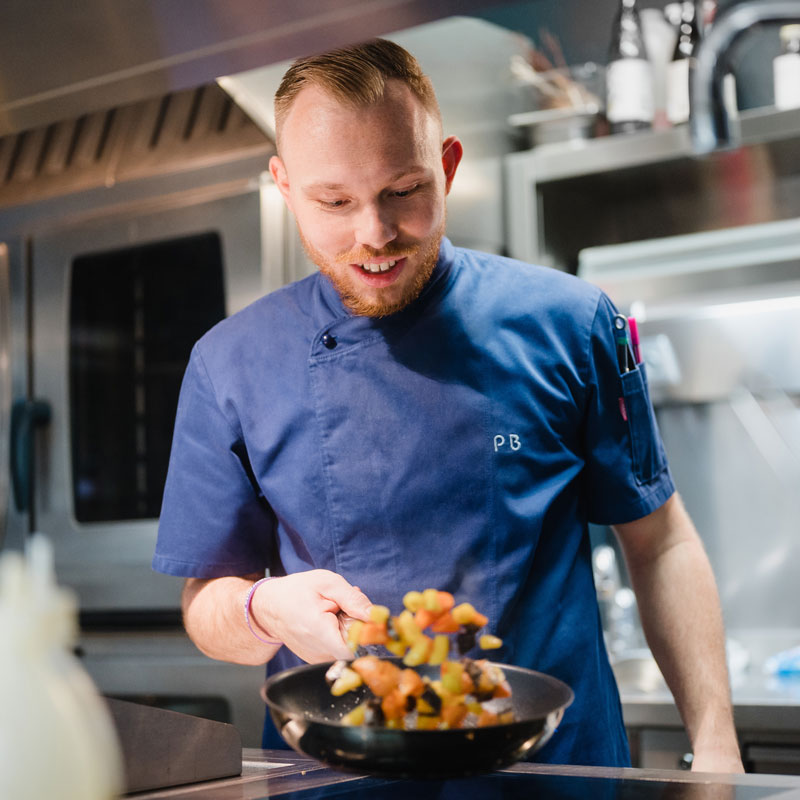 Precision machine & you could actually call him a Swiss clockwork, if the chef of the TIM RAUE restaurant wasn’t half Saxony-Anhalt and half Lower Bavaria. Part of the team since 2012, Phillip has been persistently climbing the career ladder with the same determination with which he pursues his daily business. Starting as a commis, he has cooked his way through all the stations and positions in the two-star kitchen until he rose to become head chef and No. 1 behind Tim Raue.

Rightly so, because his meticulousness and sense of responsibility make him the one who implements Tim Raue’s latest creations in the team, keeping a merciless eye on the use of goods and finally arranging them meticulously at the pass.

The Bayern Munich fan learned his trade at the Landshuter Hof and then at Schramm’s restaurant, a stint abroad in Dubai, at the Burj al Arab, completes his CV – his life, on the other hand, through his family, which backs him up and is a source of strength. 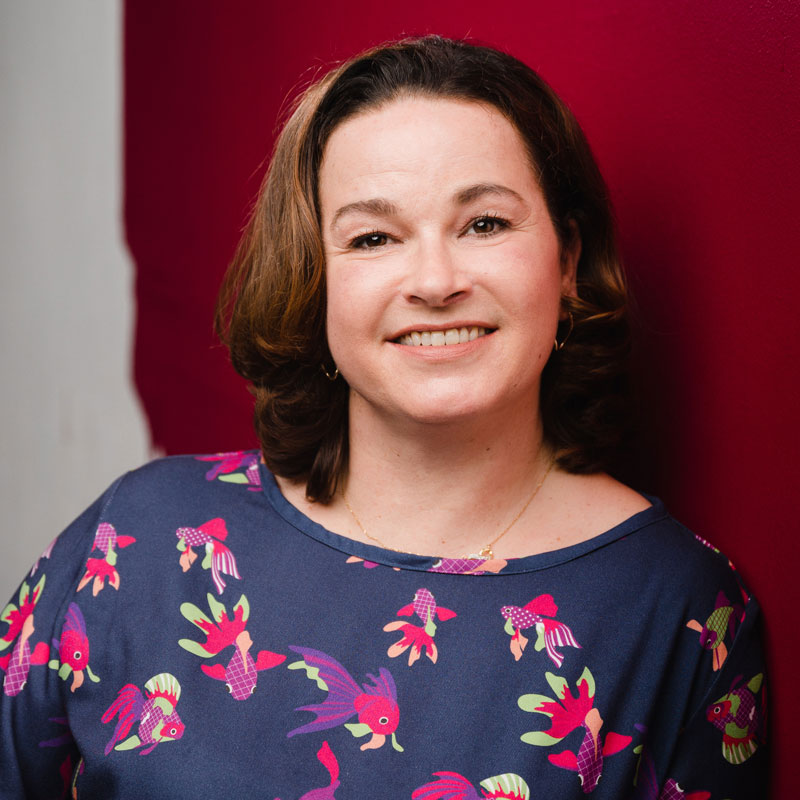 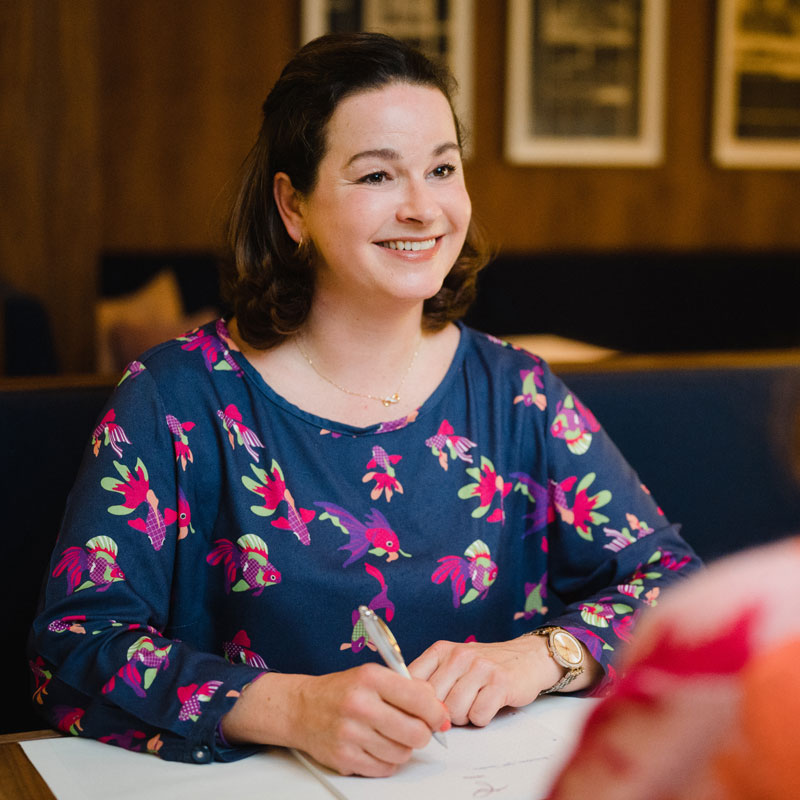 Both bedrock and sparkling diamond in every facet of her job: Cindy has accompanied Marie-Anne Wild and Tim Raue since their MA days at the Adlon Holding Berlin. Already during her first service as a temp, she shone with her charming and emphatic manner, so that she was spontaneously offered a permanent position. With the opening of the TIM RAUE restaurant, the commis position became a chef de rang position and later, so that Cindy could look after her daughter perfectly, the lively Brandenburger switched to the position of assistant to the management.

Her hands-on mentality is perfect for everyday life behind the scenes. Whether it’s accounting, human resources, receiving goods, commissioning and assisting companies with repairs of any kind or doing the groundwork for Marie-Anne Wild and Tim Raue: Cindy handles all tasks with wit, creativity and diligence.

For Cindy Kaymling, working here is more than just a job: „I don’t see the RTR and the people I work with as a classic workplace. We are a family. The RTR family.“ And daughter Lilly, now a mini-jobber, is already waiting in the wings as the next generation …